A Teeny Tiny Update and a New Monday Read!!!

Ok, so life in our house has gotten very crazy all of a sudden. I'll come back soon with a longer version of the story but the abridged edition is that Matt has accepted a fantastic promotion with his employer and we are making the move back to Brisbane. This decision has been very difficult for all of us and I've just not felt the urge to blog or talk about it anymore than I have to, so for this I'm sorry.

On a much lighter and more enjoyable note I've been asked to participate in a new Monday meme "Real Mummas on Mondays". A wonderful friend Kate King has set it up and it involves her asking a few Mummas a series of questions about ourselves and motherhood. It is promising to be very eye opening and very interesting and lots and lots of fun! I'm not sure how many weeks it'll run for but it's starting today! Head over to KK's place to read my answer to the first question!!!
Posted by Vic at 5:41 AM No comments:

Last week's Random Recipe was Pot-Roast Meatloaf from Jamie Oliver's Ministry of Food (p161). If I had been as organised as I had planned to be it would have been better, but I was having a lazy day so skipped half the recipe! I was going to make the meatloaf earlier in the day and then just pop it in the oven when dinner time rolled around but I got caught up in other things so I had to do it after I picked Elliot up from Kindy. By the time dinnertime rolled around I really could not be bothered dirtying more dishes to make the tomato and chickpea sauce that went with it so we just had it as it was. I think the sauce would have made it, without it was just another boring meatloaf. Not bad, just nothing special. As we're not big meatloaf eaters at the best of times it definitely won't be on our list of regular meals.


Pot-Roast Meatloaf
1 medium onion, chopped finely
olive oil
1tsp groun cumin
1tsp ground coriander
12 Jacob's cream crackers*
2tsp dried oregano **
2 tsp Dijon mustard
500g minced beef
1 large egg
4 rashers of bacon ***
1. Fry the onion in a little olive oil with cumin and coriander until soft and fragrant. Put in a large bowl to cool.
2. Smash up crackers until fine **** and place in bowl with cooled onion mixture.
3. Add remaining ingredients except bacon and mix with hands until thoroughly combined. Shape into a log/meatloaf shape and rub with a little olive oil.
4. Place the meatloaf in a casserole dish or baking pan and then cook in a preheated 200C oven for 30 minutes.
5. Lay bacon over the top of the meatloaf and return to the oven until crispy - this took another 15 to 20 minutes.
* I subsituted these for a good handful of breadcrumbs
** I substituted oregano with some finely chopped rosemary from the garden
*** The original recipe called for 12 rashers but 4 were enough to cover my meatloaf
**** Omit this step if using breadcrumbs
What I'd do differently:
On to the plan for this week! We're having a short week, heading to Brisbane for a long weekend so only three nights of cooking here and then I'll plan with Mum the meals for the weekend. Also, we're trying to eat the freezer and pantry down so apart from some fruit and veg from the markets on Thursday morning I won't need to grocery shop! Hurrah!

Tuesday:
Marinated steak, steamed veg and some sort of potato side dish

Don't forget to link up if you're menu planning this week!

A Bit of a Break

Just a quick post today to let you all know that I'll be taking a bit of a break from the blog for a while. We've got some family stuff happening, nothing serious, Matt and I just have some thinking and chatting to do about what is going on.

I'll still be hosting the Meal Plan Monday link thingy because I will definitely still be meal planning!!! So pop in on Monday if you're planning to share what's happening in your kitchen.

Other than that I'll see you all on the flip side!

I've not sewn or created anything crafty since finished Mia's apron. In fact, the other apron gift for our little friend is still sitting in the sewing room on the dining table along with a half packed up sewing machine. Life seems to have gotten in the way at the moment. I'm involved in starting up a Transition Town in our town (more info to come) and the kindy committee meetings have begun and the boys just seem to be going through a phase of being more demanding of my time.

Anway, it's a bit of a stretch but I still wanted to participate in My Creative Space this week so we've been creating a new flavour (for us) of ice cream .... HONEY! 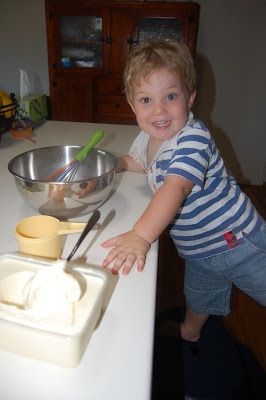 This little man was so excited to make some ice cream!!! 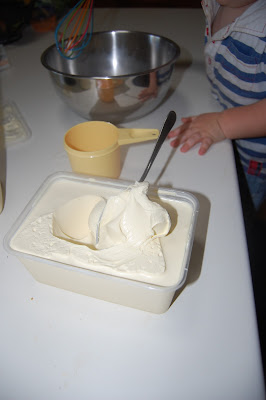 Look at this amazingly thick cream! When I went to the dairy I spoke to the lady who makes the butter and cream and she said the thick cream (instead of the thin I usually get) makes much better ice cream and she is soooooo right!
When we went to the dairy to get milk yesterday Archie announced from the back seat that he'd like to make ice cream. Alas we don't have any vanilla so I bought some cream and tried to come up with something different to do, we're out of peppermint essence too so choc-mint was off the list. Then it hit me - honey! 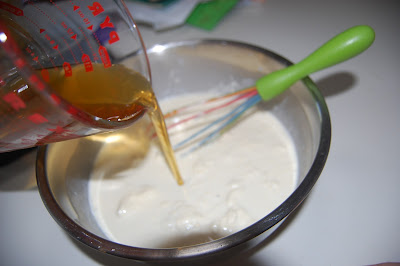 I just omitted the sugar and vanilla and added 1/2 cup of honey. I used Iron Bark honey, it is really strongly flavoured so I thought it would go well with the richness of the cream but I think it's too much. Matt (not at all and ice cream person, odd man that he is) and the boys really liked it though. Plus I just wanted to use up a good chunk of the Iron Bark cause it is way too strong for me, I prefer a Macadamia or Brushbox but anyway, that is another post! 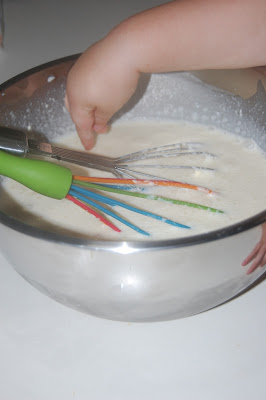 
Honey Ice Cream
1.5 cups milk
3 cups cream
1/2 cup honey
Warm the honey slightly to make it easier to mix with other ingredients
Mix together all ingredients and churn 25 - 30 minutes or until frozen like soft serve
Transfer to container and freeze until hard 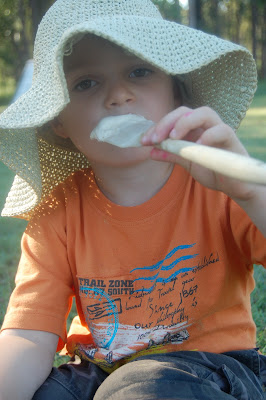 Of course two boys wanted to help do the dishes! 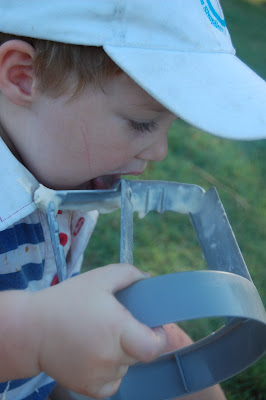 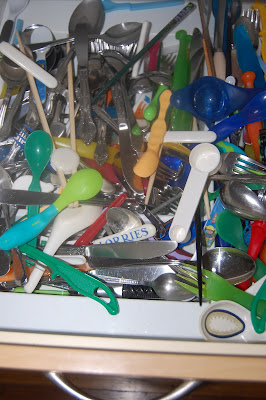 Joining in with Wordless Wednesday.
Posted by Vic at 7:59 AM 5 comments:

There are just some things that Mummies and Daddies see differently and I suppose that is one of the things that makes co-parenting so interesting. 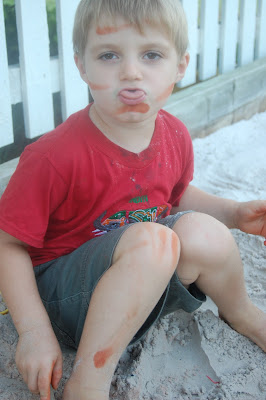 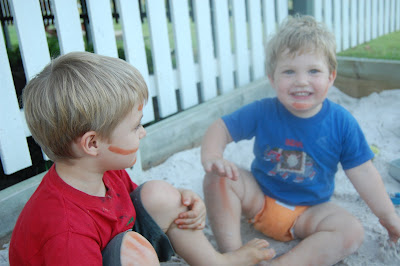 The other day the boys (including Matt) were in the sandpit before dinner and I called out that it may be time for a bath soon. This was meant by muffled laughter from all of them! Hmmm, they were up to something, I knew it! I poked my head over the verandah to see three boys with face and body paint made from crushed up rocks! Matt was crushing the rocks and smearing it on the boys and also mixing it with some sand to make coloured sand. No way in the world it would have occured to me to do that if I saw two rocks just sitting there. 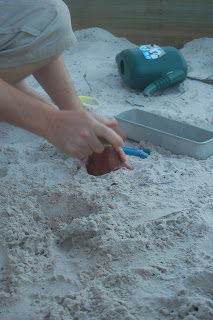 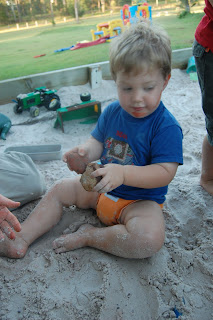 Needless to say, they had great fun and now the rocks are taking pride of place on the edge of the sandpit!
Posted by Vic at 4:59 AM 1 comment: