Playing with our Food

I have been so blessed with my boys that I haven't had to struggle to find healthy food that they will eat. Sure, Archie picks and chooses his vegies (he's going through a zucchini phase at the moment) and he's always been a big lover of meat and carbs. Elliot on the other hand, lives for vegies and cries if he can't actually see them on his plate (funny wee man that he is) but on the whole, I have two healthy, strong, growing boys who love good food.

This doesn't mean though, that we can't have fun with our food!

Over a year ago our town hosted a Children's Day in the Park where all the local Kindys and Pre-schools, Child care centres, ABA, and basically anything child related set up a stall and had activities for the kids. Despite the snakes and lizards, fire engines and police cars, painting and playdough Elliot's favourite stand was the Government's Health Department that were giving away 'apple slinkies'. Now, I had no idea what an apple slinky was, but thought it sounded fun so over we went. Well, was it ever fun! A fancy machine that cored and sliced the apple into a spiral! (They were giving away the apples, not the machines! LOL!) After he devoured the first one, he asked me for another, but being the altruistic girl I am I said that one was enough and we had to make sure there were enough for everyone else. Turns out they were donated lots of boxes of apples and they didn't have many takers! Well, after a friend who works for QLD Health told us that I had to limit Elliot to 4!!! 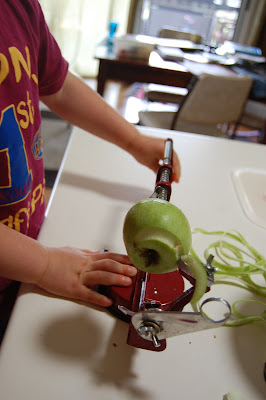 So after all that waffling, here is the point of this post, a while back, I found an apple slinky machine! Yippee! Both the boys love having apple slinkies and it actually has proved to be a useful appliance for grown ups too because it can peel the apple, I use it when making apple crumble or stewed apples. It makes the job so much quicker! All I do is run it through the maching, which cores, peels and spirals the apple, then I just cut it into quarters. Done and done! 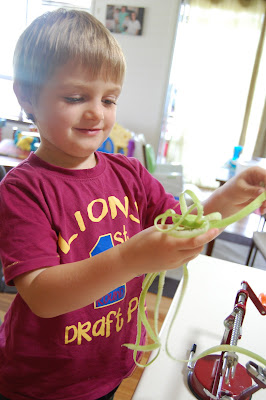 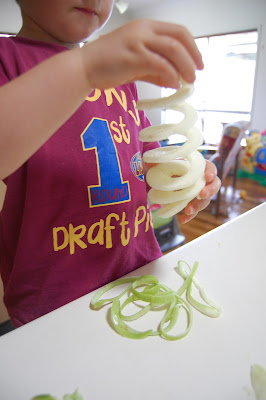 Who wouldn't love this?
Food has never been so fun!
Posted by Vic at 6:40 AM

Labels: Cooking with Kids, Giving Thanks