A while ago I borrowed Nourishing Traditions out from the library. Unfortunately the Fraser Coast Libraries don't have a copy in their system but they inter-library loaned it for me from Mackay! How awesome is that! The unfortunately bit is that because it is an inter-library loan it takes ages to organise and there is a limit to how many times I can borrow the same book. The plus side is that I have been dropping hints to Matt left, right and centre about this book and a certain birthday that is coming up in a few months. 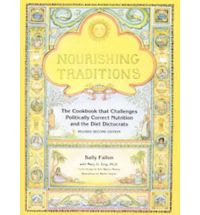 This book is right up my alley, real food! It is basically a different way of looking at nutrition and food with the focus being on 'old fashioned' food from many different ethnic backgrounds, most of which have lots in common despite being from different corners of the globe. The thing that struck a chord with me most is the use of wholegrains in different ways, in particular the soaking of grains before cooking. The author advises soaking all grains in whey, yoghurt or lemon juice for several hours before cooking to start to breakdown and partially 'digest' the grains so that it is easier for our bodies to digest and process.

As I had been wanting to eat more brown rice instead of white, I tried the soaking before cooking, what a difference!!! We've had brown rice a couple of times before but I never knew how to cook it properly and I obviously never cooked it for long enough either. Following the recipe in the book I soaked 2 cups of brown rice in 4 cups of warm water with 4 tbls of lemon juice. I just put it all in the same saucepan that I'd be cooking it in later. They say to soak it for 7 hours, but I just put it on to soak in the morning and then cooked it at about 4ish in the afternoon. To cook it is simply a matter of bringing it all to the boil and then turning the heat right down and leaving it to do it's thing with the lid on for 45 minutes to an hour. It is just as easy as the rice cooker and makes much yummier rice! The two cups from the recipe is way too much for one meal for us so I divide it into three and freeze the other two for later meals in soup or fried rice. I cooked it again yesterday but had run out of lemons and the only whey I had was frozen in 2 cup packets so I just soaked it in plain water. It still cooked up beautifully, but wasn't as soft as when soaked with the lemon or whey.

Because I had to return the book and our library hasn't gotten it's own copy yet (despite my asking ;) ) I had written down a couple of recipes when I had it out. But the other day I was googling and found this great blog by a lady who is cooking and blogging about every recipe from the book! Awesome! She gives the recipe and her little tips and tid-bits along the way. So far she has cooked 53 and has 720 to go!

I'm hoping that someone is picking up on my hints and the book will magically turn up under my pillow on my birthday morning. If not I'll just have to buy it myself, there goes my secret squirrel savings again!

Oh, the other thing I love is the cover art, beautiful wee pictures of traditional women from around the globe. I know the old saying, but I completely judge books by their covers!
Posted by Vic at 10:25 AM