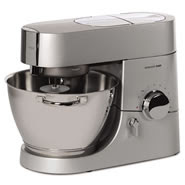 Actually, our Kenny is not the above model, he is the model below this one, but he looks exactly the same except white.

As you can probably tell, I'm very excited. Very, very excited. I have been wanting a stand mixer for ever and after much researching I decided a while ago that the Kenwood Chef was the one that best suited my needs. I needed something that was powerful, sturdy and could accomodate different attachments. If I was going to part with hundreds of dollars of my hard-saved money, I wanted it to be for something that I was going to get lots of use from!

My secret squirrel stash of savings has been growing slowly but steadily lately. I get a certain amount of money out every week for groceries etc and if there is anything left over at the end of the week it gets squirreled away. Some weeks it's $5, some weeks its $50, some weeks it's nothing at all, some weeks I have to sneak a bit out of the savings! When I started putting the money aside I said to Matt that I was going to spend it on something just for me. Not the boys, not the house, nothing that we needed, just a frivolous want. It's horribly selfish but I spend so little money on myself!

When we were at the shops on the weekend a big department store were having 15% off all their kitchen appliances. We looked, ummed and ahhed, looked again and then decided to have a look at a big electrical store across the road to compare prices. They had a better model with a free attachment on sale!! It was such better value for money than the department store lower model with no attachments and 15% off! So we made a completely spontaneous purchase, even though I've been saving for over a year and researching for a while too!

Now my secret squirrel savings is $0. I've got to think of something else to save for but as it took over a year to save the cash for Kenny, I think I've got a while to decide!

In the meantime, I'm not even taking him out of the box until we move in a month! I'll just go downstairs and look at his unopened box in the "ready to move" pile and dream of the cooking that will be done.
Posted by Vic at 12:30 AM