Last week's random recipe was Megadarra from The Australian Women's Weekly's Cook, p400. It is described in the book as 'a pilaf-style dish, often referred to as the poor man's food of the Middle East' which I got pretty excited about! It was tasty, not complicated or difficult to make and very wholesome and nutricious. And as an added bonus, Elliot devoured two servings! It was recommended to be served with a salad like tabbouleh or fattoush but I knew that wouldn't go down well with the boys so we had it with a side of steamed vegies and some Greek yoghurt. The recipe says that it serves 4, but they must be four incredibley hungry people because it fed the four of us (Matt and Elliot had seconds) with two serves (enough for Matt and I to share for dinner each) in the freezer.
Megadarra
2 cups brown lentils
1.5litres boiling water
3/4 cup white long grain rice
1.25 litres boiling water, extra
1.5 tsp ground allspice
1 tsp ground coriander
2 tsp salt
Caramalised Onion
1/4 cup olive oil
4 large onions, thinly sliced
2 tsp white sugar
1/2 cup water
1. Place lentils and 1.5L water in a large saucepan, bring to boil. Reduce heat and simmer uncovered, about 15 minutes or until lentils are just tender. Drain
2. Meanwhile, make caramalised onion. Cover to keep warm.
3. Combine rice, extra water and spices in medium saucepan. Add half of the caramelised onion; bring to the boil. Reduce heat and simmer, uncovered for 12 minutes. Add lentils and salt; simmer uncovered about 3 minutes or until liquid is absorbed.
4. Spoon megadarra into serving bowls and top with remaining caramelised onion.
Caramelised Onion: Heat oil in a large frying pan, cook onion and sugar, stirring for 5 minutes. Add half of the water, bring to a boil. Reduce heat and simmer uncovered for about 5 minutes. Add remaining water; simmer, stirring for about 5 minutes or until onion caramelised. 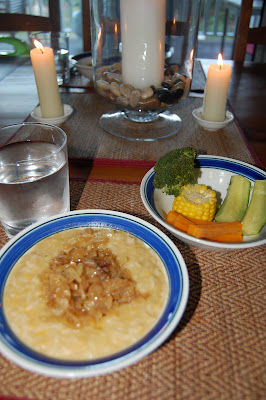 What I'd do differently next time:
So, on to the plan for this week. It looks like this:

** If I can find all the ingredients. It is a Japanese dish that calls for dashi stock, made from dashi powder yet our two grocery stores and Asian grocer in town don't stock dashi powder. I'm going to have to see if I can get it online or have a friend in the big smoke send me some in the mail! If I can't get it in time for Thursday's dinner it'll definitely be on the list another week, it looks divine!